When asked recently about the common thread that seems to run through every story I’m passionate about, the answer came as no surprise to me: the subjects concern quality. Either good quality, like Jeni’s; or bad, like some businessmen turned recent statesmen…mind you, either of those pronouns could be air quoted. Nevertheless, quality is the underlying aesthetic, a thing to celebrate when it’s exceptional, and deprecate when it’s absent. At the risk of being “meta”, the writing itself should be an obsession with quality, otherwise it’s just more “noise”, Internet or otherwise, of which, we can all probably agree there is an overabundance.

That said, my search for all things “quality” didn’t take very long in Tokyo.

I was really looking forward to visiting Aoyama as it forms a sort of nexus between the infamous Harajuku and the stylish Shibuya boroughs. Not long after being there you sense there’s almost an imperceptible heartbeat of youthful spirit, and it shows on the faces of the young while having a halo effect on the old.

I hopped on the Ginza line directly to the Aoyama-itchōme station. It was a short walk from there up to street level, and not long after I made my way around and through the streets to 5-5-4 Minamiaoyama, the home of Ring Jacket Co., Ltd., and one of four Ring Jacket Meister shops in Tokyo. Since first reading about Ring (in the last year or so, Ring Jacket has been recognized by Esquire, GQ, Robb Report and other men’s style magazines), I’ve been intrigued by the company’s lineage. Founded in mid-50s Japan, the company began by reproducing American style suits, as the influence of post-war style took hold. Taking a formal approach to American menswear, Ring Jacket applied exceptional levels of tailoring to American standards but with a twist: Neapolitan construction. Take the unlined sprezzatura of Italian style, pair it with a stout double-breasted coat and produce it with a precise, Japanese made-to-measure attention to detail and you have a 2017 company making some of the nattiest menswear in the world. 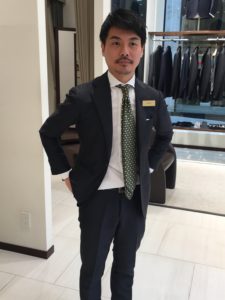 Fully intending to come back to the States armed with one of these impeccably made little numbers, I met with my sales person, Naoki, upon arrival. Naoki did not speak English. I do not speak Japanese. But between his best efforts and my Google translate-assisted cockery, we managed to get to the right sample books. Inside these books were fabric samples from some of the oldest mills, representing locations from Savile Row (Holland & Sherry) to Naples (Caccioppoli). I intimated I was looking for a nice brown or khaki colored sport coat, with some hints of dark blue, that could either elevate denim or pair nicely with navy trousers. We commenced rifling through the books like searching old Fantastic Four comics for the appearance of Galactus. Eventually we settled on a smart wool and silk blend.

I was contemplating the custom touches I would be putting on this bespoke bad boy (navy lining, hidden pockets, etc.) when I realized I had trips upcoming to other Tokyo shops, not to mention a week to follow in Thailand. Suddenly, it was clear I would have to make some hard choices. So I told Naoki I had a few trips to make and would think it over.

Around the bend from Ring Jacket was the Aoyama branch of Comme des Garçons. A chosen honoree of the Costume Institute’s recent spring show at the Met Museum of Art (“Art of the In-Between”), Rei Kawakubo’s iconoclastic designs are must see in their intricacy, detail and stylish incredibility. Her couture is seen as art, to me like street art, though she’s personally disagreed with several fashion critics’ assessment. And she’s one of the rare designers whose “commercial” clothes have cultivated an obsessive following. For example, her collaborations with J. Crew on the “Play” line. Though the staff discourages pictures in store, I was able to take one of a recent interpretation on the now ubiquitous bomber.

On my way back to the subway, I happened to stop to take a picture of what I thought was a somewhat unique flower shop, the Aoyama Flower Market tea house. I didn’t know at the time that the attractive flowers out front front a café and tea house that among other things serves delectable ice cream dishes with flower based jellies and actual roses in the dessert. It reinforced just how many quality hideaways there are in Tokyo, often right as you’re walking by.

As far as building design, it should be mentioned that Aoyama is home to one of Prada’s “epicenters”, the six-story architecturally distinctive building in which the structure, façade and space combine to form a single unit. The epicenter was designed by the Swiss architecture firm Herzog & de Meuron (part of the team that was responsible for the “Bird’s Nest” in Beijing).

Shibuya is my favorite prefecture in Tokyo. It’s also one of the most difficult to navigate. Google maps armed, I quickly (and easily) got lost trying to hunt down Okayama denim in a neighborhood bustling with its share of construction, trains, people, thoroughfares and shops. I became dependent on the kindness of Japanese strangers, three of whom somehow managed to each give uniquedirections. While lost, I did stumble upon Supreme in Daikanyama to ponder a few inscrutable t-shirts. The store clerk said nothing to me, I said nothing to him, neither of which is unusual at Supreme. But I caught my breath there and headed back toward the Crossing. Thoreau once said, “Not until we are lost do we begin to find ourselves.” And now, in retrospect, I wonder if Shibuya’s Wonderland-like neighborhoods are part of the reason I’m fond of it.

The aforementioned Shibuya Crossing is the mother of all intersections. At night, with its complementary beating neon, it’s like Times Square on Adderall. During busy hours it’s possible to see more than a thousand people crossing at every light change. You would think the sheer humanity and countdown nature of a street crossing would produce all manner of human cruelty but everyone skirts by each other like cells of oil in water. On one occasion, our group happened to be in Shibuya well after dark and the Crossing took on an almost dystopian feeling once all the trains had left the station. I enjoyed it though. Being there at that time was similar to other contemplative geographies, almost like a Grand Canyon or the Lincoln memorial.

Part of the reason Shibuya is so popular is because it’s so goddamn dense. Fashion and style, nightclubs (Tokyo’s Blue Note for example), department stores, upscale restaurants and divey pubs, media stores and food purveyors, Shibuya has it all in spades. So I made my way northwest, past the Crossing, and hit up one of the locations I was looking forward to all trip: The Real McCoy’s.

Much has been written about the craft with which Japanese apparel makers approach “Americana” wear. I’d venture to say that the quality, authenticity and range of clothing at The Real McCoy’s (TRM, for the sake of brevity) is as comprehensive as it gets (and whose name is a double entendre, given the brand’s focus on quality and the era of clothing it produces). There’s a focus on three main categories of clothing: military, biker and more general Americana-wear (under the auspice Joe McCoy) which encompasses everything from Fisherman’s knit caps to t-shirts to schoolboy cardigans.

First up however, is Japanese denim. As America’s global influence increased post WWII, American occupied Japan experienced the USA’s style of military wear, khakis, denim and everything in between. Either selling or giving items away, GI’s influenced a whole generation and not long after Japan began emulating the designs and design processes of denim manufacture (in fact there’s a great documentary, titled Weaving Shibusa, on the history of this and Japan’s obsession in producing denim; one of the cooler items of note was learning that indigo is brown in its natural state and only turns blue upon oxygenation).

What does this have to do with The Real McCoy’s? They are one of a handful of brands whose denim is woven in Shinya Mills. The denim is made on shuttle looms, which is a throwback compared to mass production methods, and each detail is well thought out and brought to life with the concept of takumi being front of mind.

When I got to TRM, it was invigorating to be confronted by so much cool shit in one space…I felt wonderment, like the intro to Patrice Rushen’s Remind Me. I met Logan, a transplanted Californian who has been working there for a year or so. I noticed Logan was casually sporting the clothes he was selling and as he brought me up to speed with some needed context on all of the different apparel, his passion for the brand and the clothes shone through. 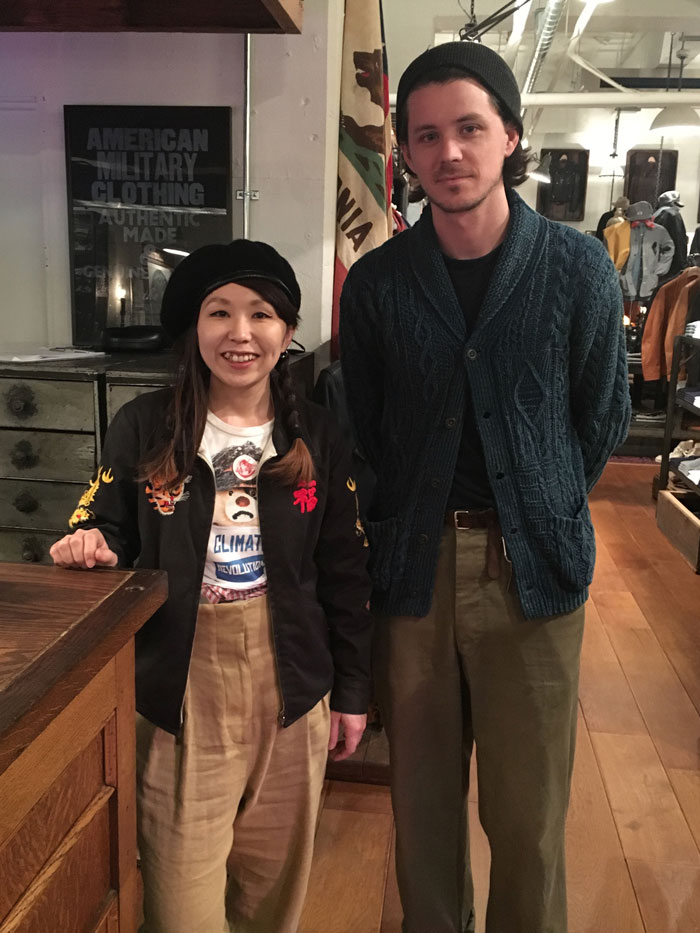 For example, there were sweatshirts, hoodies and pants unlike any I’ve felt before. The shirt felt dense, heavy, but also soft and hand woven. Some may be more luxe, with cashmere blends, or some hoodies may feature double layer construction to emulate the heavyweight feel, but for those who like traditional sweats, upon which all others were created, these are for you. Logan explained that they’re among a handful that use the labor intensive Loopwheel production, which weaves at a snail’s pace (single meter of fabric produced every hour). Loopwheel textile is knit in an oval shaped sequence which yields a fabric that will stretch with wear but retain it’s shape upon washing. We then got into a discussion about the meticulousness and need for accuracy with which they produce their military wear.

As mementoes, I took home one of those Loopwheel t-shirts, a lightweight Navy rain parka, and a couple pairs of socks (I’m a big fan of socks, which I’m convinced are overlooked as far as clothing, so they will get their due on the blog one day). We took a picture, I thanked Logan and the staff and made my way out…with a 2017 catalogue in case I had second thoughts. The catalogue, by the way, goes into as much detail on how one can approach designing a historical flight jacket properly as it does of describing the men who were in the WWII theater (Alberto Vargas, the famous pin up artist is recognized in a line of tees, sweats and mugs).

On my way back to the Crossing I took a breather on a bench in front of an unassuming little home wares shop called journal standard Furniture. I wandered in, because, why not at that point. The place seemed like the lovechild of West Elm and abc carpet & home, but within the smaller confines of a boutique. Of all things, a navy bath mat caught my attention. It sported the name of a hotel (the Luik), which I took to be fictional. But I wasn’t sure. Then I realized my joyful willingness to explore and uncertainty about what I found was another a common thread for Tokyo.

Have you been to Japan…Tokyo? Leave a comment and let us know, we want to hear about your experience! 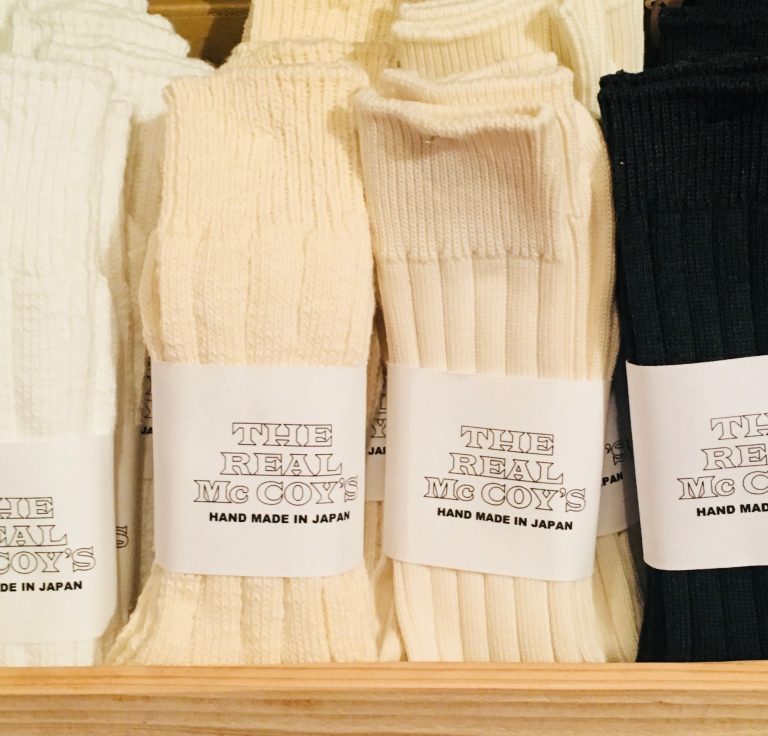 Why The Right Socks Will Change Your Life