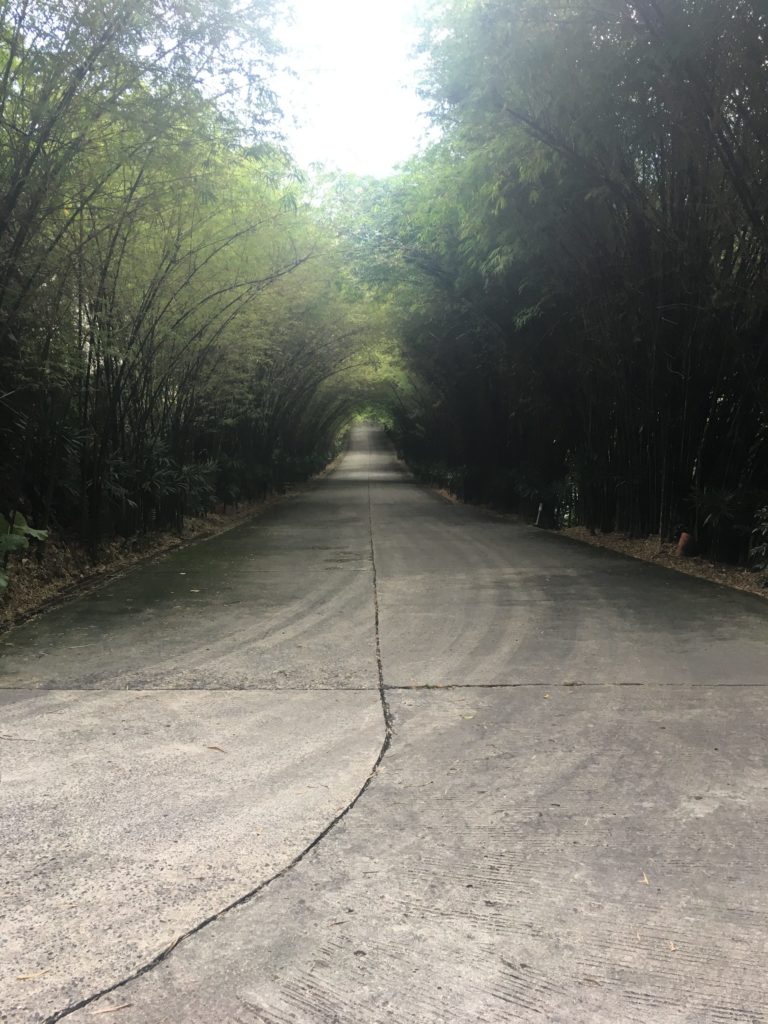 The Land of Smiles

When most people think of Phuket, Thailand, they immediately think of the beach. Whether it’s the sandy shores of Patong, the wide spaces of Karon, the clear waters of Kata or the relative privacy of Bang Tao, Phuket is home to some of Thailand’s, and it could be argued the world’s, best beaches.

But in the spirit of being iconoclastic, the following paragraphs will attempt to show how – after traveling roughly 8,700 miles – it’s possible to visit Phuket and not go to the beach. Not even once.

I assure you, we didn’t join a secret society like the backpackers in Alex Garland’s ode to Thailand The Beach (come to think of it, the main characters actually spent all their time at the beach, so maybe never mind). Gratefully, it wasn’t a case of T.D., from one of several street stalls offering sunbaked chicken or leafy greens (we wisely took pre-trip shots to “idiot proof” ourselves just in case we indulged in some street meat). Nor can I pin it on the exhaustive activities of the previous week in the streets and back alleys of Tokyo…which sounds like an optimal beach primer if you ever heard one.

Our reason for not going to the beach was our accommodation, or more specifically, our villa. Now some very large and well-known hotel chains (we won’t name any names) have rather loose definitions of the term ‘villa’ and boldly, but not unsurprisingly, lump it in to describe what would otherwise be classified as a simple hotel room. Thankfully, The Pavilions aren’t about that.

We arrived close to 10pm, fresh off 7 hours of flight time, tired as hell and in need of a drink. And the open-air lobby, the staff with those trademarked Thai smiles, warm tones, elegant interior design, refreshing face towels, the hotel’s mascot cat and yes, a complimentary adult beverage, was like balm to sore feet. We just sort of melted, as opposed to checked, in. Soon after we were escorted to our quarters.

Not to sound like Cleo McDowell, but when I tell you we had our own villa I mean we had our own villa! Ours was a tropical pool private villa, with a 12×4 meter infinity pool, sundeck and lanai with views of the Andaman Sea. And there it is. If the practical concerns of life hadn’t intervened I dare say Wonderhoney would’ve spent the entire time in that pool. And since it’s private, clothing can be, um, “optional”…just sayin’, if we wanted to, we were halfway around the world and in no danger of running into anyone who knew anyone we knew. Later on I learned these villas are on Mr. & Mrs. Smith’s list of the Best Honeymoon Suites in the World, which unintentionally made it a fun sort of second honeymoon. And the pool isn’t the only reason why.

The worldly and modern interior design of each villa features distinctive touches of Thai influence and decoration that make for one of the most tasteful hotels I’ve ever stayed in. The 1,000+ sq. ft. space boasts a kitchen/bar with granite counters, a master with king bed, sitting area and flat screen, a massive en suite bathroom with freestanding soaking tub, separate rain shower room and water closet, vaulted wood ceilings with fans in the bath and living rooms, a proper sectional fit for an entire family to watch movies, and sliding access doors to the aforementioned pool from both the living room and master bedroom.

The food on the property, arranged by Aussie chef Belinda Tuckwell, deftly and deliciously balances a menu of authentic Thai rounded out by traditional French, American and Italian dishes. The spa (though we didn’t indulge), like most services in Thailand, was very affordable and in-villa treatments are available depending on the accommodation one selects. This will come as a surprise but the first couple of days were periods of intense laying about and do-nothingness. Our work-outs were limited to ordering room service of exotic Thai dishes, reading the hotel’s copy of Mr. Porter and sipping whiskey bought at the local town market.

By the third day it was Villa 2, Beach 0. We were brainstorming over the idea of matching “slug life” tattoos (really the only way to be sure the moment lasts forever) when we realized things had gotten out of hand. It was a hard choice to make but we managed to roll our bones out to see some of Phuket’s livelier areas and cultural history.

First up was Patong, about a 45-minute drive south of the Thalang district and unquestionably the most popular area for tourists to Phuket. Featuring a nearly two-mile stretch of sandy beach, there’s a ubiquitous hum in Patong as the beach, scooters, hotels, neon, vendors, restaurants, go-go bars, beer bars, clubs and even a mall combine to form a hive of activity. Running down the middle of this thrum like a spine is Bangla Road.

We visited Patong twice, once in the day and later on in the week at night. We were very fortunate that the Thai New Year’s festival, Songkran, overlapped our trip, but really, we had no idea what was in store. For Songkran, the washing away of sins and bad things is the basis for the celebration…but it is also the foundation of what’s morphed into a massive water festival celebrated by everyone in the country. As we descended on Patong that night, we learned the festival often manifests in Super Soaker fights in the middle of Bangla, splashing or dumping water on friends, family and strangers (we’d later learn this includes innocent looking little boys and docile elders who smile as you walk past them, then shoot you in the back).

Wonderhoney realized we didn’t even bring knives to this gunfight. So we got our rain smocks, took a deep breath and prepared to celebrate Songkran as the Thais do.

We stopped for some dinner and watched anxiously as the action heated up along Bangla. Given the typically hot nights in Thailand the water festival is a welcome thing and a fun way for everyone to cool off, though it’s also the catalyst for higher arrest rates and road accidents due to the drinking (think of your average night on Bourbon Street with a giant water fight for extra measure). We settled in at the Parrot Bar, where the proprietor, Tookie, and friends served us tray after tray of tiny tequila shots. As night turned into day we traded shots, hugged some strangers we don’t remember and got soaked in water, giving just as good as we were getting.

Our other venture outside of base camp included a trip down to see the Big Buddha on top of the Nakkerd Hills between Chalong and Kata. On the way there we stopped at the stunningly beautiful Wat Chalong complex. The Wats (Buddhist temples) welcome many visitors but are sacred spaces where locals pray and deferential behavior should be exercised when entering and touring (it was depressing to witness several Westerners doing some typical Westerner shit).

Then it was time to see the Buddha. As we headed up the steep, winding road to Nakkerd Hills, we passed some tourists engaging in elephant trekking (riding on their backs), which apparently is a thing there, but not exactly an ethical one. The good news on that front is that earlier this year the Phuket Elephant Sanctuary (where the animals can retire and live healthy lives) opened up and celebrities like Leo DiCaprio and Aaron Paul have visited and endorsed the park.

As you approach you begin to get glimpses of the Buddha but its full impact hits you only when you stand dead on in front of it. The huge statue is approximately 150 ft. high and 82 ft. wide. The BB is made of concrete but the surface is layered in white jade marble and the result is a shining figure that projects mightily against the sky. The statue dates only to 2004 and the ongoing construction of the hall beneath it and the maintenance of it are funded entirely from donations by the hundreds of visitors each day. Visitors can buy, as we did, gold leaves, bricks and slabs, whose proceeds go to said maintenance. Messages of love and peace are written on these, and then placed in and around the site. At the risk of sounding too Pollyanna-ish, all that collective goodwill and sentiment seems to imbue the site with serenity, a hushed peace and I couldn’t help feeling like it was good for our soul.

Our last day in Phuket was hazy, spent laying around the villa, using the master access door to the pool and not being in danger of running into anyone who knew anyone we knew. 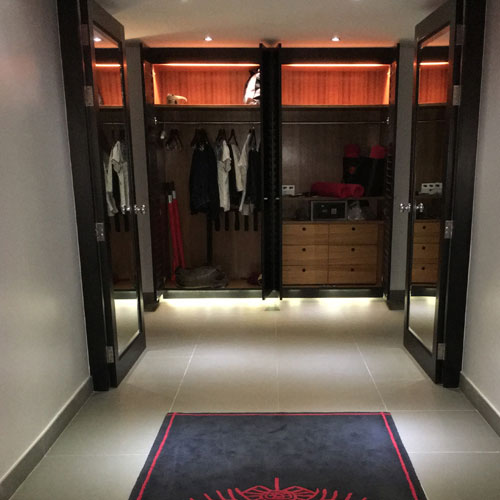 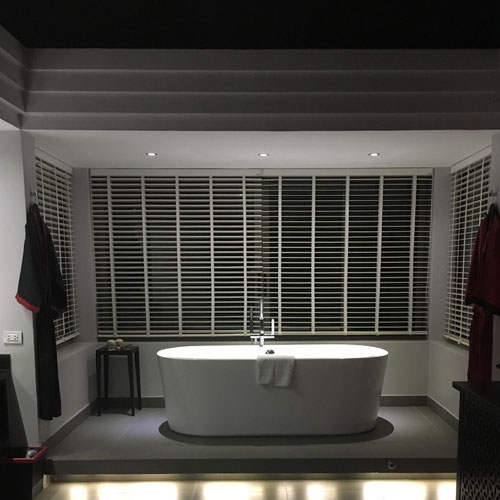 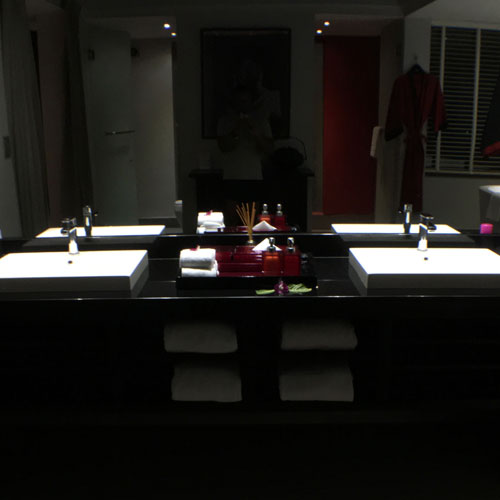 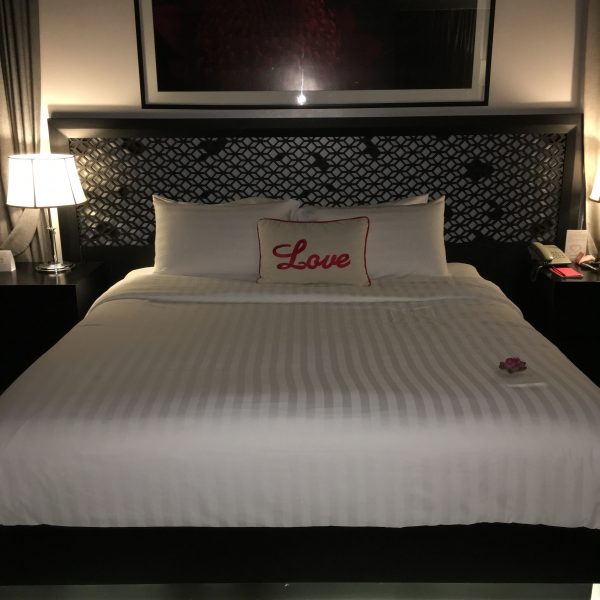 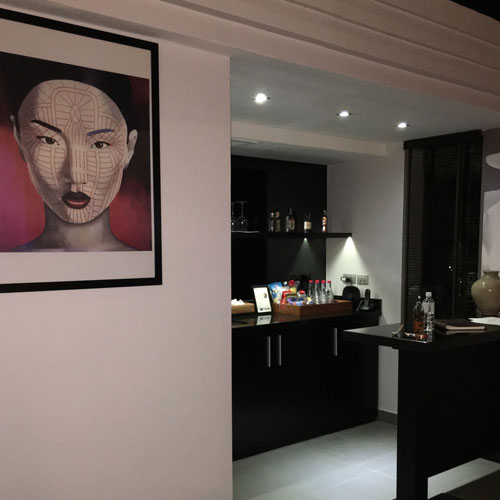 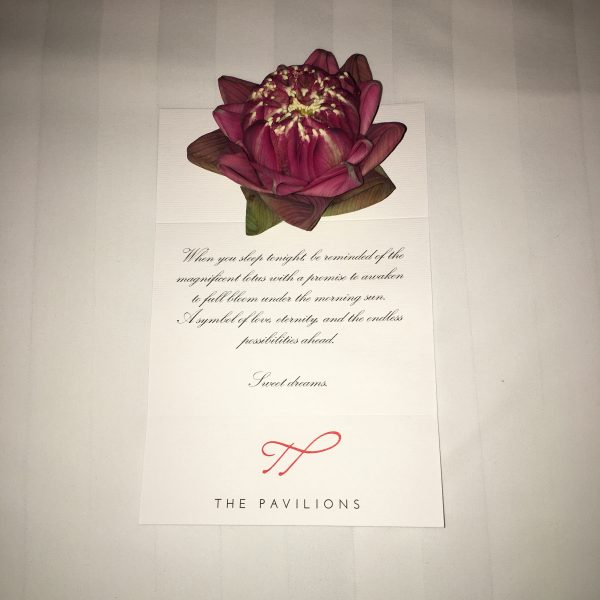 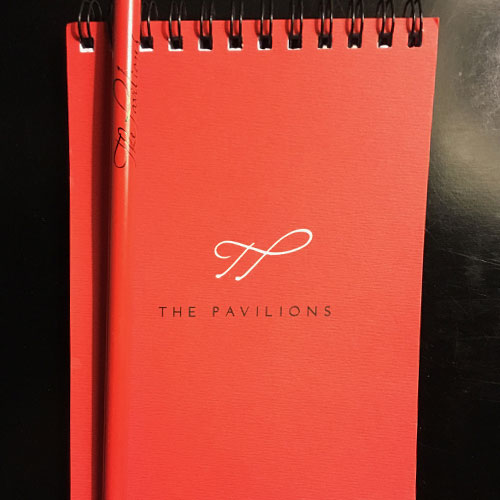 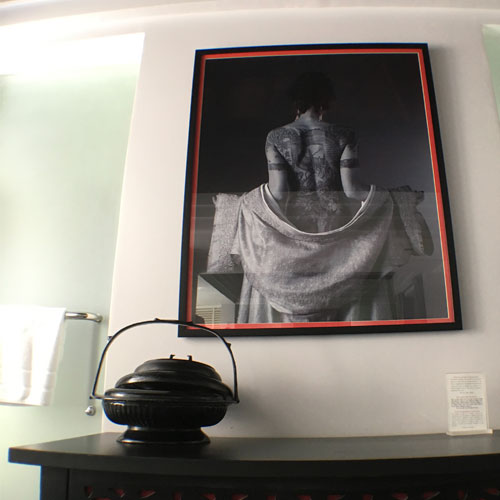 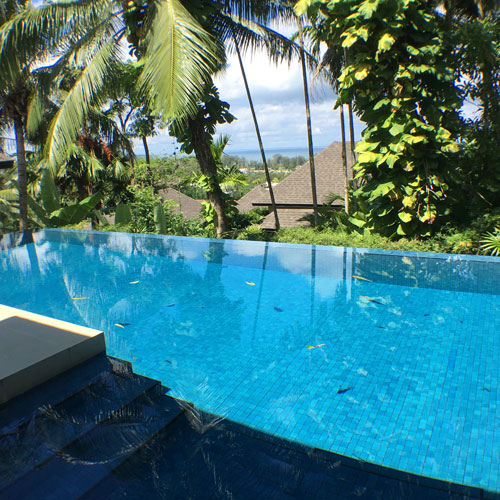 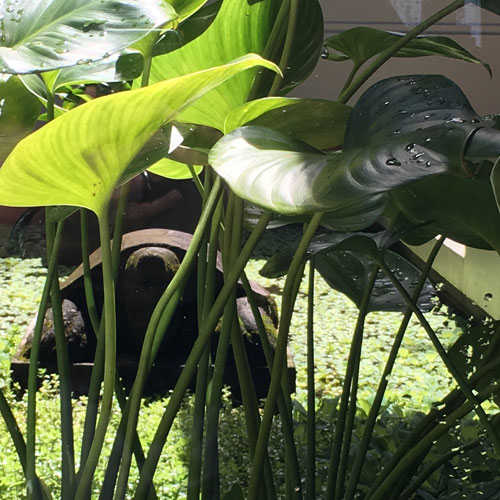 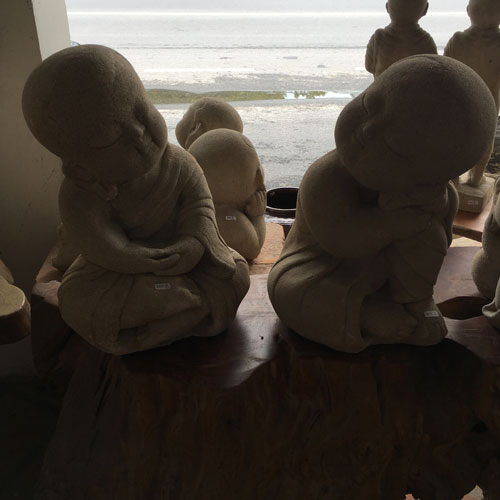 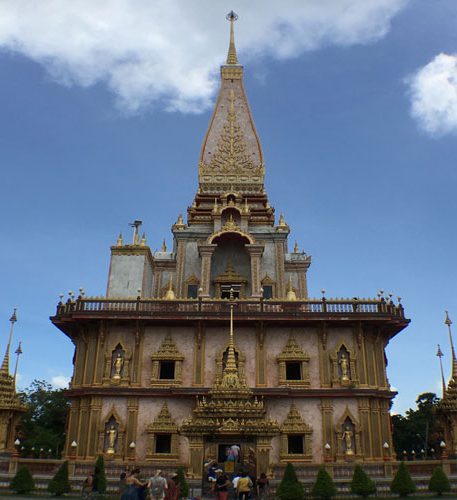 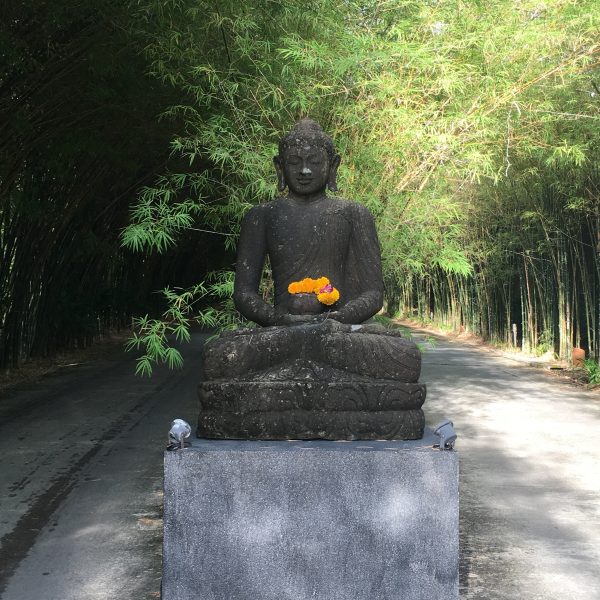 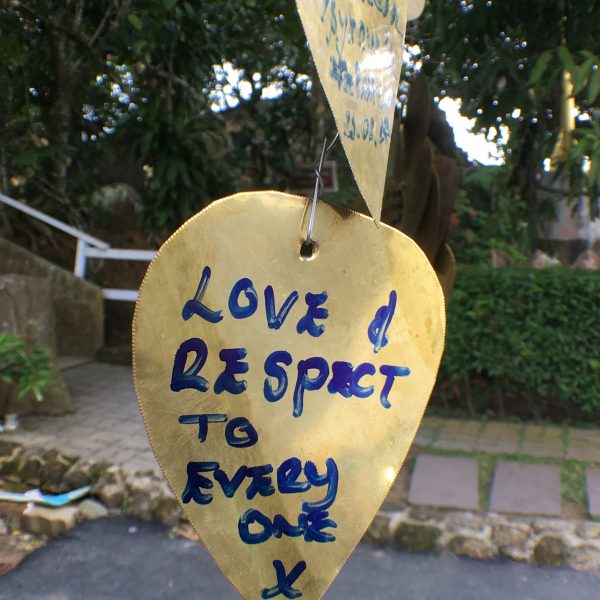 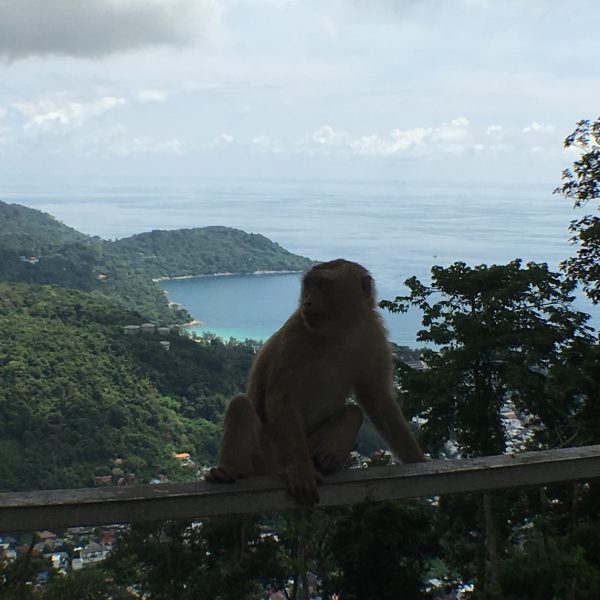 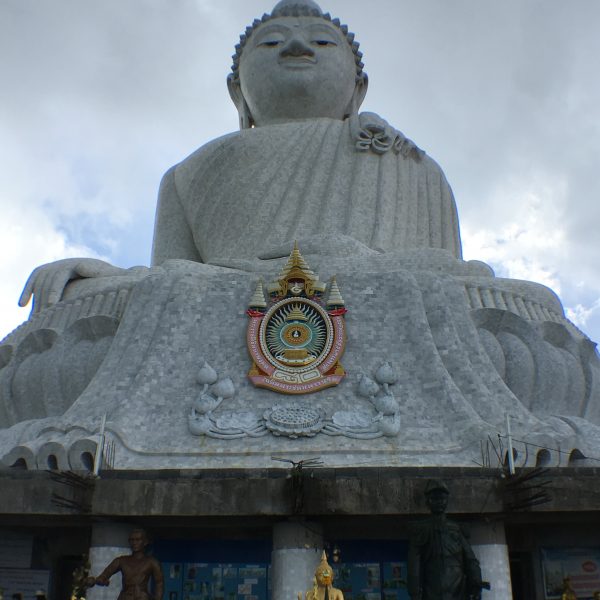 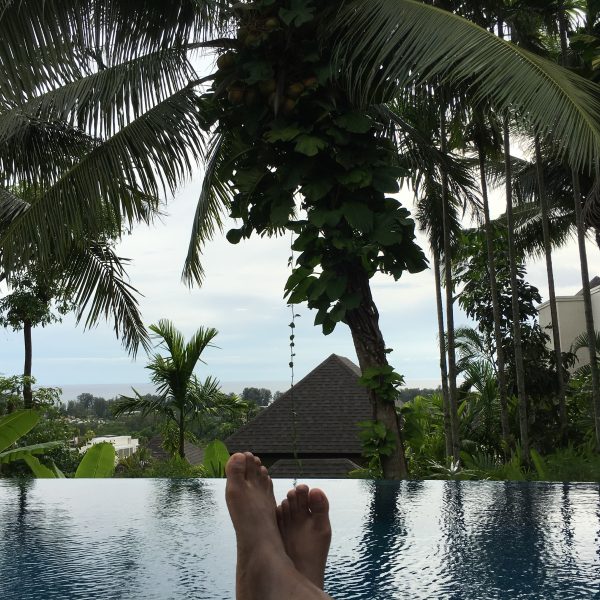 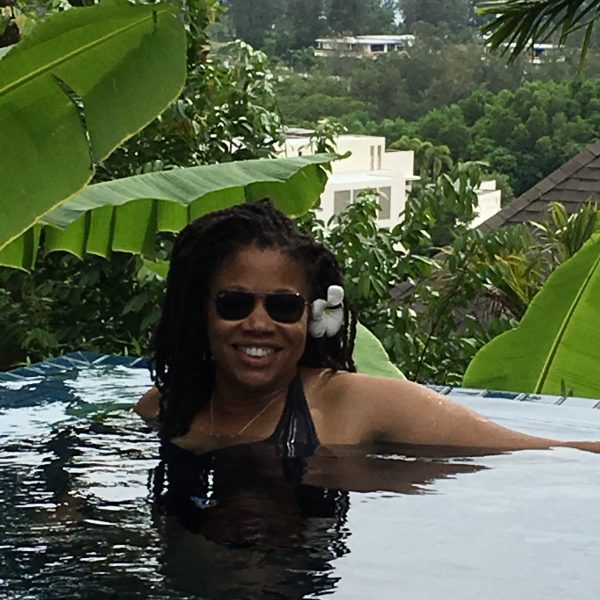 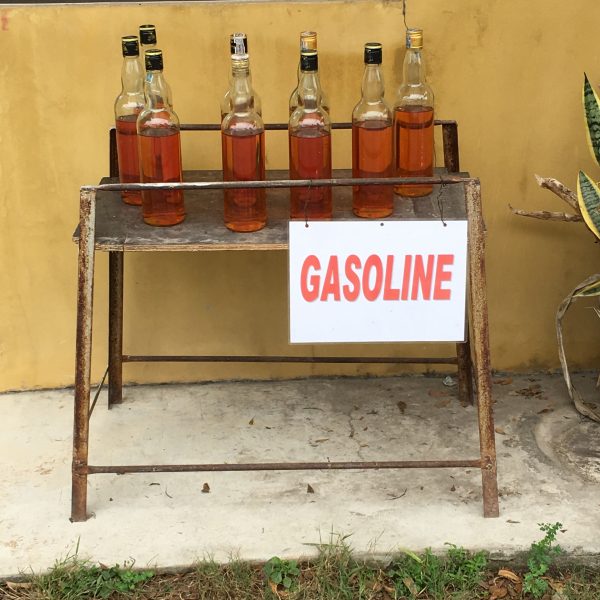 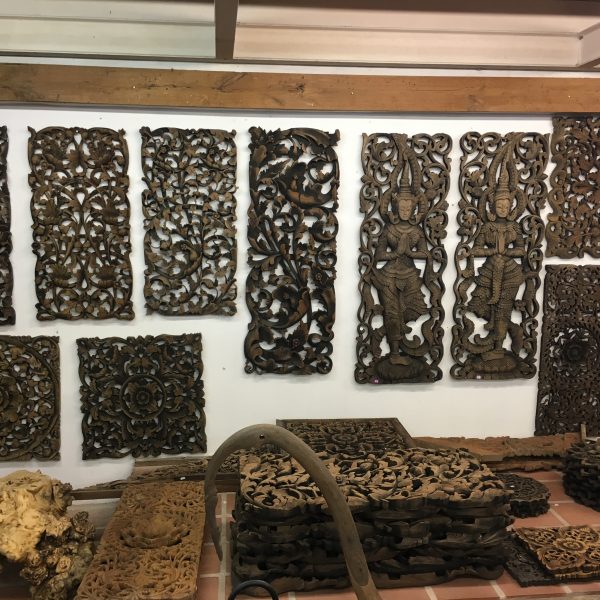 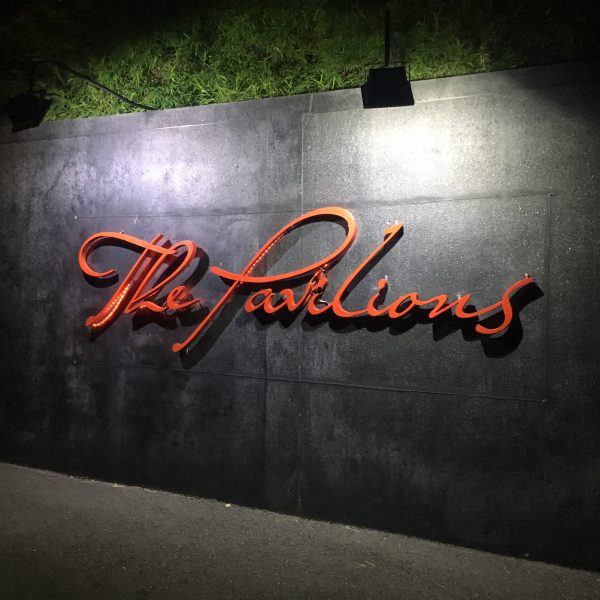