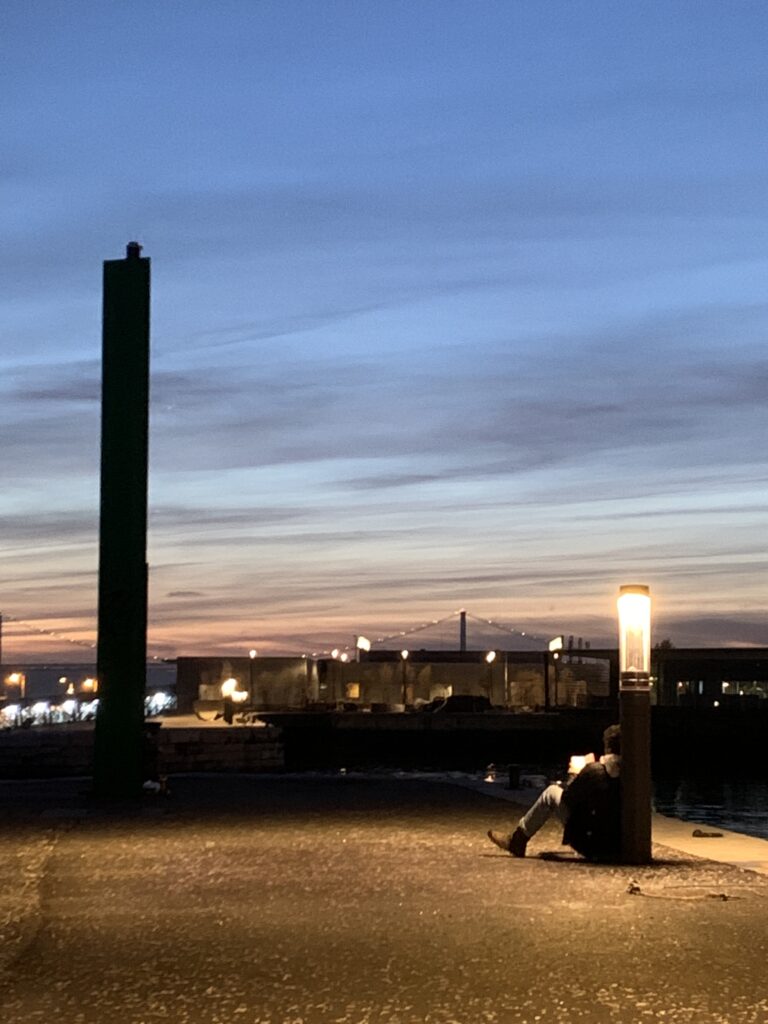 Hidden history and magic in Lisbon

I didn’t know what the hell I was doing.

The pandemic? Fading, but not beaten. And we were boarding a flight to Europe, with tickets I bought months earlier when I was convinced, you see, that the pandemic would be in some sort of travel-based remission by the time we boarded.

Clearly it was not. In fact…the morning of our flight I tested positive for Covid.

I won’t get into detail, but just know that it was a false positive (thankfully) that only cost two hours of manic anxiety and $175 in additional last minute testing to prove.

And I’m happy to report it was more than worth it.

Portugal offers so much beauty, friendliness, magic and history and I’m very appreciative of having had the experience.

Taking some advice from a friend, for the first leg of our trip we stayed near the Avenida da Liberdade (Avenue of Liberty) in Lisbon. Our boutique hotel, the Maxime, had themed rooms you’d imagine the Moulin Rouge would have were it an inn.

It’s a great location since the boulevard is basically walking distance to almost anything you want to do in downtown Lisbon, positioned as it is near the Baixa, Alfama, and Bairro Alto neighborhoods.

And since our trip bookended Christmas, it was a magical time to be there. The holiday decorations along the boulevard felt enchanting, almost fairy tale-ish.

For those looking to do a little shopping, the boulevard is also home to a butt ton of luxury houses including Louis Vuitton, Prada, Christian Dior, Chanel, Balmain, Gucci, Givenchy, Saint Laurent, and more.

I love to discover a city as I amble through it, but also have a few places in my back pocket in case things get slow (or we get hungry, thirsty, etc.). Luckily, Lisbon doesn’t get slow.

We strolled up the Avenida in the brisk morning air, where just past the Praca Marques de Pombal was the Parque Eduardo VII playing host to a fair. Looking from its rear, the park slopes downward, toward the Avenida and views of the Tagus river as it empties into the estuary and the Atlantic in the distance.

It was making our way back down the Avenida that we began to notice the Portuguese pavement (or calcada portuguesa).

The pavement’s origins stretch as far back as Mesopotamia. And these are the tiles you’ll walk on through countless sidewalks and streets. In fact this style of pavement can be seen in any city where Portuguese culture is present (i.e. Sao Paulo, North Africa, Macau).

Museums aside, simply by walking on the street you’re absorbing history through the soles of your Nikes.

As we explored the city, it seemed we took pictures of every building within sight that sported the famous ceramic tile façades the region is known for. Seeing the “azulejos” up close brought an appreciation for the craftsmanship, history, culture and beauty of Lisbon all at once.

The next day, we made a pilgrimage any writer (or reader) would love to make: we visited Livraria Bertrand, the oldest known bookstore in the world. Founded in 1732, the bookstore features some impressive façade tiles of its own with a charming cafe off its rear.

Inside, the store offered an English section but I honestly enjoyed perusing the books in the native Portuguese whether I understood it or not. Something about visiting a bookstore on foreign soil feels even more comforting than one at home.

We walked through Chiado toward the Tagus and Praça de Comercio, the main commerce plaza (or palace yard) that once hosted the Royal Palace of Ribeira.

The plaza was destroyed in an earthquake in the mid-18th century and promptly rebuilt under King José I, whose statue, mounted on a horse, still resides smack dab in the middle of it all.

We were on our way to a tour, but not just any tour.

The African Lisbon tour offers sight seeing within the context of the slave trade that built Portugal’s historical wealth.

Our tour was given by Naky, a multilingual and genial dude originally hailing from Togo whose “passion for the intersection of African and Portuguese history” (Airbnb bio) had both of us primed to learn.

The first thing we learned was that the very plaza we were meeting on served as a main artery for the Transatlantic slave trade.

I’ve not yet been to the Cape Coast Castle in Ghana where many enslaved Africans departed the continent. But standing where so many entered a strange land and were then promptly abused, bought and sold…

Our tour covered many spots. From the centuries-old, beautiful and earthquake surviving Church of Mercy to the heartbreaking hill of Santa Catarina.

We ended our leg at the Rua do Poço dos Negros, a street whose name some city historians believe came from a royal letter dated 1515, asking the city of Lisbon to build a well, so as to deposit the bodies of dead slaves that were left abandoned in the streets due to disease.

Apparently the neighborhood where this Rua resides gained some attention for being one of the “coolest in the world” for its charming boutiques, theaters, etc.

No shade, it’s always good when slept on areas get props for fun things to do. But I wonder how many people flocking to such a cool place are aware of its history?

The tour was amazing, educational and breathtaking. It captured the historical charm of Lisbon without giving her a pass on her past. I came away from it with three affirmations:

Portugal’s Pastéis de Nata are as delicious as they are ubiquitous. There’s been a ton written about the custardy, sugar and/or cinnamon dusted finger pies throughout the interweb.

So it was time for Wonderhoney and me to try our own. We sat down at one of several Banana Cafes that line the Avenida and, cradling the delicate pastry cup, gave our bellies what they hadn’t known they needed.

The Pastéis de Nata go with everything from a beer to a mojito, a fact we learned first-hand.

The next day saw us exploring the sometimes narrow and steep, but welcoming streets of Alfama. Ambling through the neighborhood is fun as every new turn, walkway and corner presents another cafe, storefront and discovery.

We somehow managed to order some fish, salad, beers and bread at a jam-packed cafe within one of the neighborhood squares.

I say somehow because the waiter didn’t speak a lick of English and our Portuguese was misfiring all over the place. But our instinct of plopping down anywhere there’s a healthy native crowd was validated once again…the food didn’t miss.

A visit to the Douro Valley will have to wait until our next trip. But not being able to go this time didn’t stop us from sampling some of the country’s wine at a few restaurants, as well as at the Cheap Wine Bar and Shop on Rua dos Remedios.

True to its name, the pours are inexpensive (as little as 2,50€, roughly $2.60 USD), which can easily make the exploration of Portuguese and Spanish wine a pursuit that leaves you wondering where the night went.

My favorite of the night was the 2019 Periquita Reserva. I have to admit it was hard to distinguish all of our pours by the time we said goodbye.

*Note to the reader: One of the richest wines we had in Portugal was the organic and biodynamic Casa de Mouraz Dao Tinto.

Our final night in Lisbon featured an all too common meal of delicious vittles at Audrey’s in the Santiago de Alfama hotel.

Part of Audrey’s charm was the cozy cafe space, the 70’s R&B soundtrack, and a garçonete with an impeccable acumen for service.

I had the chicken with Piri Piri sauce and fries. Wonderhoney the scallops seared in champagne butter and sage. It really was a special way to end our trip and a proper send off back home.