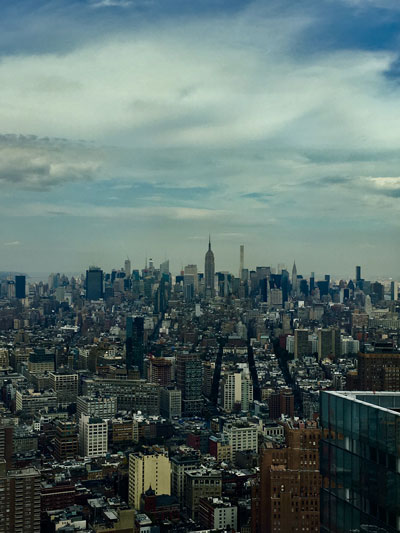 A Quotable Visit to NYC, Pt. I

It was Thomas Wolfe, wearer of slightly rumpled, early twentieth century suiting, author of Of Time and the River, born of southern pedigree and DEAD BEFORE HIS TIME (an empathetic saying, but maybe just horseshit based on the wisdom we have at our disposal) who said, “One belongs to New York instantly, one belongs to it as much in five minutes as in five years”.

It was not Tom Wolfe, a pioneer of New Journalism, wearer of natty white suits in any season (screw you Labor Day), author of The Electric Kool-Aid Acid Test and Bonfire of the Vanities, born of southern pedigree, and somehow still alive (update: Mr. Wolfe passed away in May of 2018), who uttered this quote.

Why is this important? It’s probably not – since the names are essentially interchangeable. But goddammit people, in an age where this nation’s highest office has rubber-stamped fabrication as a profession let us at least strive to know what’s knowable, right?

I’ve been to New York less than some and more than others. I’ve always flown into either nearby Queens or far flung Queens but this October trip came by way of Newark. After an easy train-ride into Penn station we were spat out on west 31st street. The last time I visited NY, Uber was still beta-testing their idea in San Francisco. So we made like 2010 and hailed a yellow cab out of nostalgia. After spending way too much time riding up a choked 28th street instead of taking a more efficient route my objections were met with unintelligible nonsense and a hefty fare upon arrival at our Chelsea hotel. I was fairly sure we got fleeced but it made me smile, and realize the common feeling of Mr. Thomas Wolfe’s popular words had hit home…which is probably why they’re misattributed so often.

I have made a lot of mistakes falling in love, and regretted most of them, but never the potatoes that went with them.

Wonderhoney and I made a long overdue pilgrimage to Chelsea Market: saw some wallet tugging designs at Artists & Fleas (Men’s basics from Curated Basics, Kevin Marcell’s map prints and the unique apparel of The Local Branch were favorites), contemplated knives at Bowery Kitchen Supply and scarfed mini doughnuts at the Doughnuttery.

While doughnuts and assorted baked goods will always have a place in my heart, they were merely an appetite whetter for what was to come.

The sad demise of the traditional New York deli has been well chronicled, though thankfully Katz’s is going nowhere. Our love of the corned beef on rye will never die. Hell, no matter the scourge, New York’s constant refrain seems to echo Churchill: “We shall defend our island, whatever the cost may be…we shall never surrender”. And so it was that we went to The Polo Bar for a slimmer turn on this sandwich classic.

Ralph Lauren’s underground restaurant is a meticulously appointed throwback to an era of New York dining that reminded me of Henry and Karen Hill being led through the Copa to their own table. The equestrian décor on the wood paneled walls is ubiquitous, the table and flatware is as branded as it is elegant, but my favorite thing was the fluffy plaid pillows in the padded, caramel leather banquette (I’ll tell you why in a moment). Ralph Lauren’s creative-services team led the design and it’s easy to see his style throughout.

Informed by our server that the corned beef on toasted marble rye was Mr. Lauren’s favorite, I felt justified. I ordered a Sazerac, and proceeded to sink into the leather with my drink. WH ordered the Polo bar salad and a steak.

The steak came slightly overcooked, and manifested into an apology and a complimentary dessert of the Polo bar brownie and a slice of cheesecake with brulee’d banana slices on top: a combination of dense perfection and paper thin toffee texture that won us over. The corned beef’s lightly salted meat and melted Swiss was well-balanced, savory and I couldn’t eat it fast enough. About 10 minutes after killing the righteously crispy fries, horseradish slaw and pickle, I discovered why those pillows were there. We settled back, watching Howard Stern’s black mop and crane-like figure wend his way through the dining room and alternately taking turns checking out the stylish restrooms in a fit of bathroom envy (still figuring out how to integrate that hunter green tile into the blue, white and walnut palette of the Lab).

Blacker than midnight on Broadway and Myrtle

G, an old friend who’s been living in NY off and on since the late nineties, was DJ’ing at a bar that night in Brooklyn so we took the 2 and headed straight to Crown Heights, close to Prospect Park. It’s about a 15-minute drive from there to the intersection Mos (or Yasiin Bey) put down on “Mathematics” from the seminal Black on Both Sides. Bed-Stuy, like many neighborhoods in NY and around the nation, has seen the effects of gentrification (a more than ten-fold increase in white residents and more than a twenty-percentage point drop in African-American residents since 2000). So yeah, coming over to the BK at midnight is an all-new ballgame…all we had to fret was, in my friend’s words, lovely mommies with strollers.

The lounge was just the right kinda downshift. It’s no secret New York has the most consistently impressive cocktails in America (Blacktail, of Battery Park City, won best new cocktail bar in the country at this year’s Spirited Awards). And the bartenders at Drink are well aware of the standard that’s been set, crafting libations that were great elixirs for the night.

We caught up with our friend, made some new friends, chilled to some laid back beats courtesy of Comfort Crusade, and spent time laughing and enjoying each others’ company…what one, non-alcoholic drink company refers to as the best stuff on earth.

It’s been three years since the opening of One World Trade and the Memorial complex and I wanted to visit for all the reasons you’d imagine (paying respects, seeing the new architecture breathe life, somehow or someway supporting the resilience of New York by being there).

There’s a certain pressure at the WTC site that doesn’t exist elsewhere in the city. A reverence around the small campus is underscored by the falling water of the reflecting pools in the background. Wonderhoney and I held hands as we walked.

The exterior of the SOM designed Freedom Tower’s torso is accentuated by octagonal sides. This effect was achieved by “shaving” the square edges along the verticality of the building and standing close to it in person is pretty impressive. There’s a three-story observation deck at the top of the Freedom Tower but another old friend who works in the building ushered us to the equally stunning view from the sky lobby on the 78th floor. At a symbolic 1,776 feet, 1 WTC has fit in New York’s skyline like a glove and joined the “National Park”.

From One World Trade we walked the underground connection to the PATH station (the Oculus), designed by Santiago Calatrava. The station features a mezzanine with an array of shops underneath the memorial plaza, and above ground, resembles “bird’s wings being released from a child’s hands” (Calatrava’s original concept involved hella expensive intricacies like an automatic roof, and glass that would have enhanced the skeletal nature of the wings). Both the Freedom Tower and Calatrava’s buildings have garnered their share of criticism. But it’s important to remember, the New York Times architectural critics of the time did not necessarily regard the Twin Towers as successful designs either.

Headed uptown for dinner that night, we stopped for a taping of The Late Show with Stephen Colbert (and the brilliant Jon Batiste & Stay Human). Colbert was his usual witty, Trump exposing, incisive self – a surprise visit by Lin Manuel-Miranda kinda (sorta) made up for not seeing Hamilton on the trip – but we were straight up gigging to Stay Human’s incredible warm up. Batiste, a Julliard graduate and musical director for the Atlantic, whose razor sharp personal style and fashion sense has been highlighted in various publications, leads a dynamic band that swings effortlessly from funk to hard New Orleans jazz to R&B. If they ever tour the Bay area we will be there.

No trip to New York is complete without going up to Harlem. We met one of our friends at the restaurant Solomon & Kuff (named after the sons of a slave who was bought at 10 for four gallons of rum and some cloth; but eventually bought his own freedom, and that of his family). The menu, crafted by Executive chef and CIA grad, Chris Faulkner, features Caribbean dishes like Fish Fry & Yuca and a Goat Sampler with grilled goat and potato tostones.

Chris, incidentally my friend’s fiancée, joined us to answer questions around the menu, ensure we enjoyed our food and had a pleasurable dining experience (which we certainly did). The establishment’s co-owner, Julie Grunberger, also graciously spent some time chatting with us and giving us some background about the restaurant’s history.

The bar at S&K, whose cocktails were created by mixologist and co-owner Karl Franz Williams, includes a myriad of rums and features the hands down best cocktail I had while in town (and I had a few): the Kentucky Blossom. This new devilry consisted of rum, bourbon, lemon, orange honey syrup and just the right amount of cinnamon, which lingered in the best way. WH had the Telenovela, another excellent drink, which featured cachaça and an herbally essence of turmeric that made her repeat turmeric! all night.

After another memorable evening, we caught a ride down the Henry Hudson parkway, back to Chelsea, back to our hotel, letting Manhattan back in. 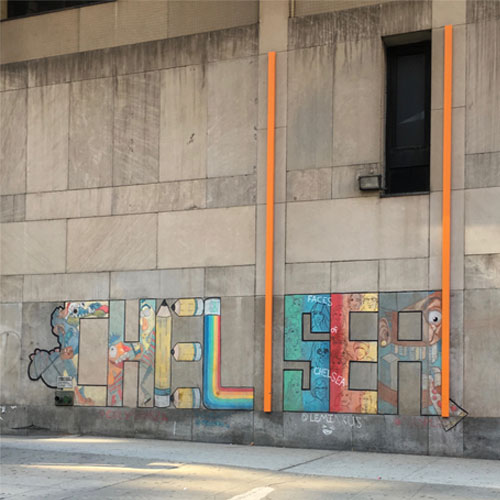 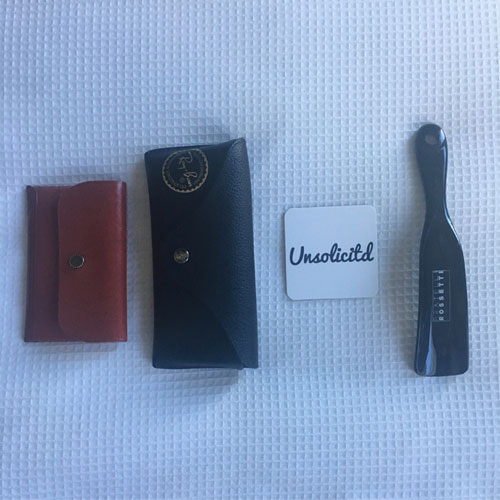 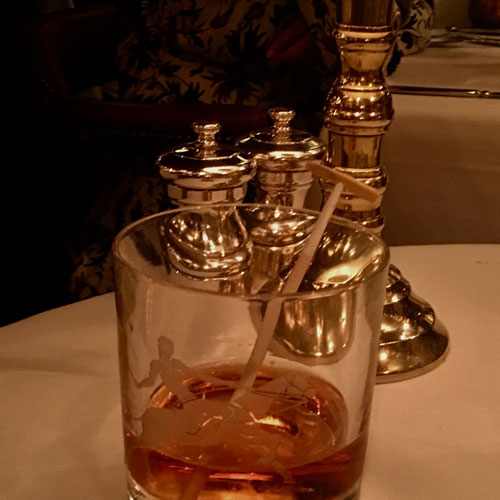 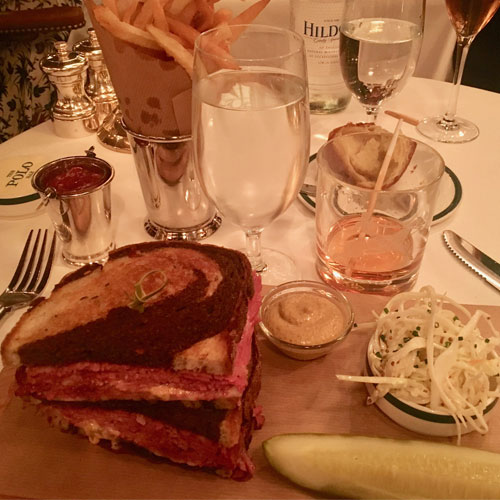 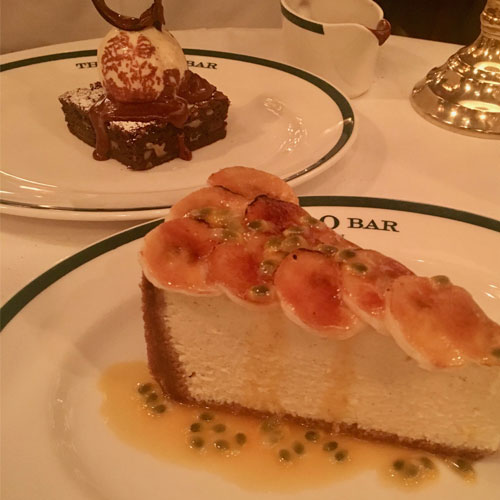 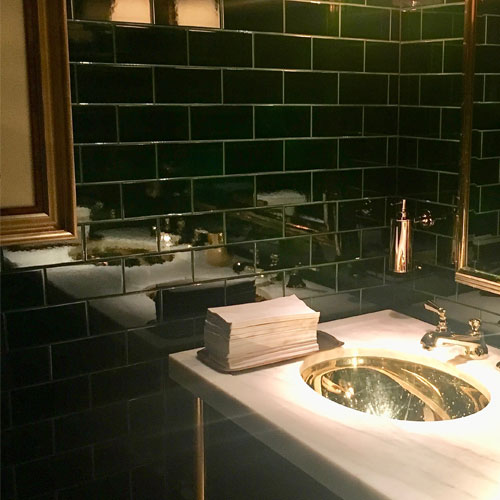 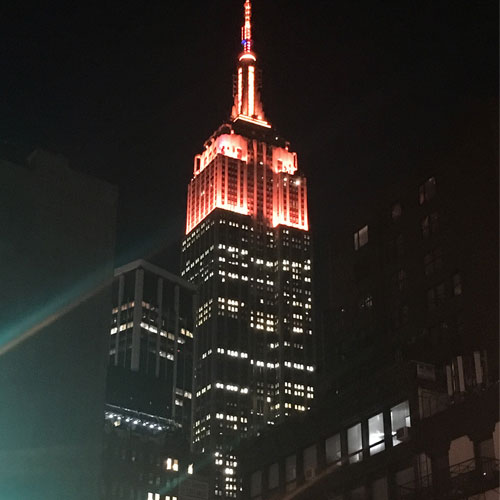 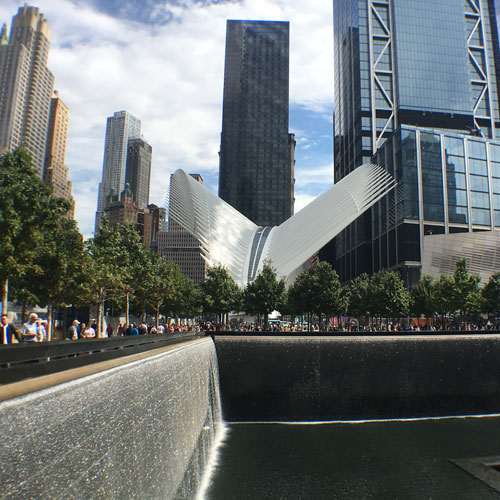 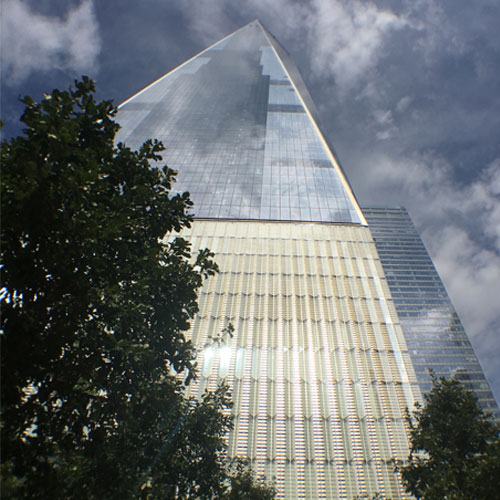 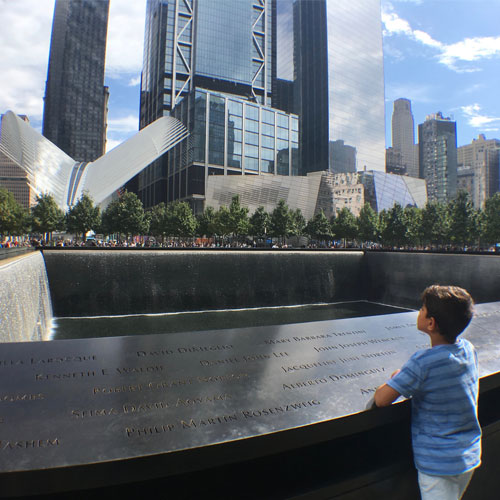 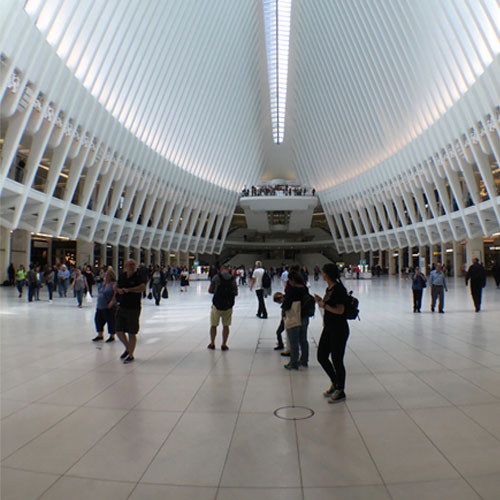 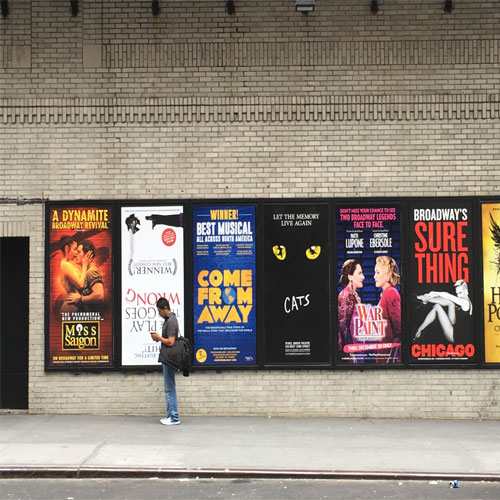 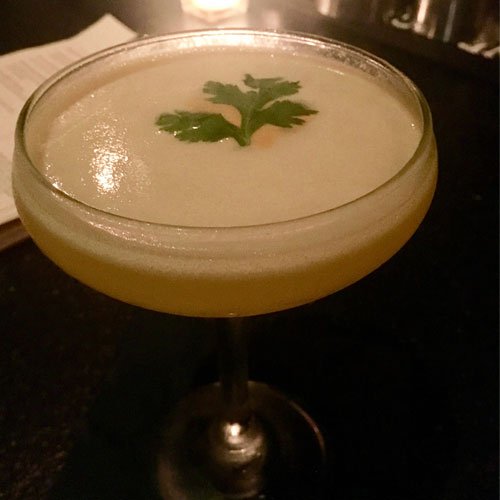 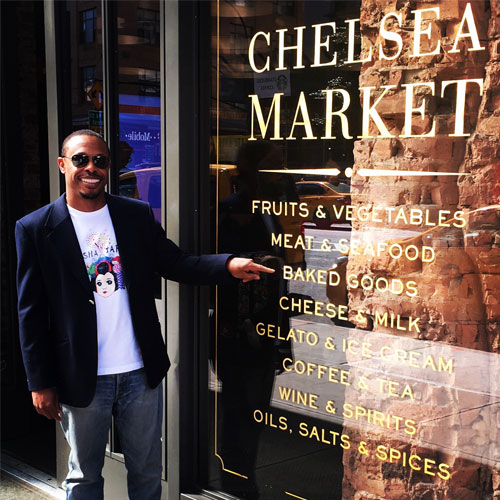 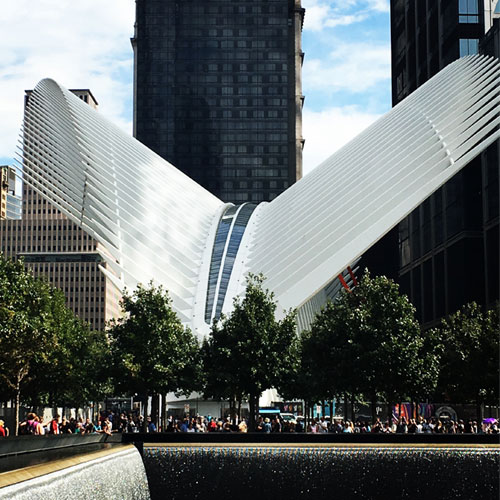 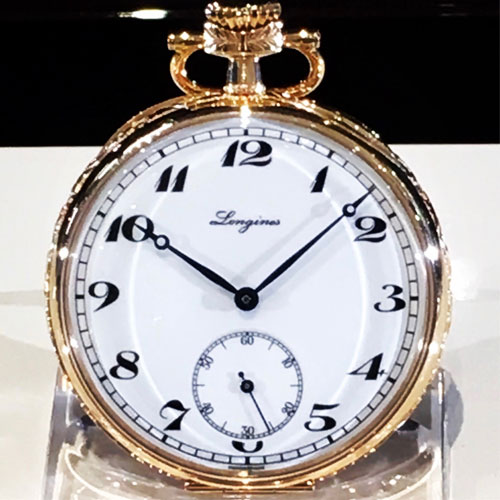 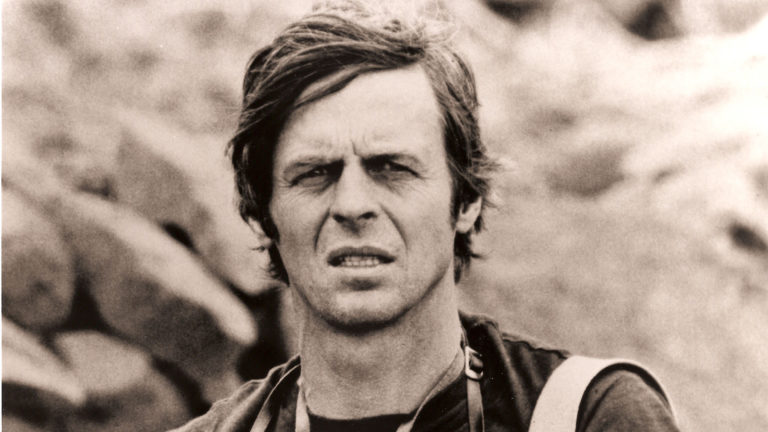 This was a very enjoyable piece. Your sojourn through the City was well-documented, putting the reader seemingly by the side of You & WH. The detailed descriptions supported by the quotes from other well-known New York observers made this feel complete. Def looking forward to more observations of the planet from Unsolicitd.

Thanks so much for the kind words! We look forward to bringing more.

This is my first time visit here and i am
really impressed to read everything at one place.

Glad to hear your visiting NY! Thanks for checking us out. Return to the blog or follow us on Instagram for more updates.